Edgy short stories from a collection entitled Thirteen O’Clock, due out later in 2014.

Those who have seen the other side need no convincing that sometimes the wall at the edge of our reality can crumble and leave us exposed to another time and place we have no control over. These are stories of people who have seen and heard things the average person has not, but before passing into that other place they were kind enough to warn us that, in the final analysis of our short lives, it’s about time.

Here are a few free tidbits, including a story about a man who answers a knock on his door late one night and discovers…well, you can just read it for yourself. Enjoy!

Please scroll down and select “Nevermore” which will download or open a PDF file with the entire story.

Baggage Claim
A man nearing retirement finds he has one last job to do that he just can’t pass up.

Camera, Camera
A man tries to get into the digital age and buys a new camera that has already been used. By him.

Floaters
A man complains to his eye doctor about floaters. Do they really look like faces?

Lone Man
A young boy looks for his missing mother and finds his own missing childhood.

Lost Then Found
An aging man gets help from an unexpected source while trying to figure out why he keeps losing things. 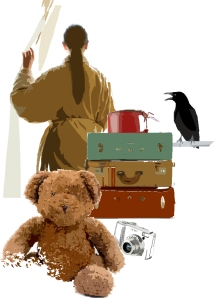 NEVERMORE
Who’s that rapping, gently tapping, at my chamber door? ‘Tis not a raven, I say no more.

Rapture
Suppose Christian Rapture is real, but the place you go is not to heaven (or hell)?

Teddy
Teddy bears have been protecting children from nightmares since 1905. This one has something deadly to deal with.

Wytchwood
An agoraphobic woman in an upscale town learns why her neighbor went away and left the lights on.