You may wonder why I decided to do a WTC column about guns less than a week before Christmas. For the answer we have to go back to around 1962 when I got a brand new single-shot .22 rifle for Christmas. It was a year before Jack Kennedy would be brought down by an assassin’s bullet in Texas and just about everything in America seemed pretty rosy and bright. You could buy almost any type of gun you wanted by catalog and the last major gun laws dated to the time of the gangsters around the prohibition era. 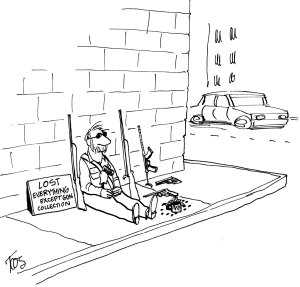 I lived in a New Jersey suburb but used the gun in the woods near my grandparents in upstate New York. At home the gun stayed on my wall and the bolt stayed hidden by my dad. It was more about trust and maturity than about shooting, and my friends and I were anxious to prove we were on our way to manhood. To violate the trust we were given meant being treated like a child again. I’m sure there were some stupid kids, but I never once heard of anyone being injured or killed.

Fast forward to today. I have always refused to have a gun in the house with children around. I made that decision after seeing my then 2-year old daughter get past all the child safety locks on cabinets and drawers and even the gate to the stairs. I’m sure gun locks and safes are considerably more difficult than safety locks, but it was just my choice to not have a gun. I have always enjoyed shooting however, and over time found ranges that had guns you could use for an afternoon. Some ranges will even keep your gun for you to use there. Good deal.

I really don’t know where or why or how we went off the rails on the whole issue of responsibility in our modern society. But I do know that people seem to be acting less and mature as time goes by, and too often some people never grow up no matter how old they are. The reason a society has laws is because some people just can’t respect other people or show common sense. Laws are meant to protect and keep order by defining limits. Most are well-intentioned, but some are disguised as protection in an attempt to exert control for political purposes. We will have to wait to see whether Joe Biden and his task force are sincerely trying to help, or will just promote an ideology. I can guess, but it’s too soon to say.

I wish I could say that no gun is ever a problem, that they aren’t misused and that it’s easy to ensure people are protected from them without violating the Constitution. I can’t say any of that and yes, Mr. Obama, it is a complex situation. Thank-you for seeing that and please keep your ideology from coloring things too much. I truly hope the debate encompasses mental health, cultural influences, changing core values and so on. It probably won’t, but I’m staying hopeful for the moment.

What do I want for Christmas from Santa? I usually say “world peace,” but this year I’d just settle for having all those innocent lives back that were lost in the mass shootings. My Christmas would be a happy one knowing that they were able to celebrate too. Short of that, my wish is for our leaders to show wisdom and do what is right for us all. Something has to give, and I pray it is never again innocent children.

As Tiny Tim said, “God bless us, every one.”