Let’s face it, television during holiday seasons is really boring. Even with several hundred channels to choose from, there still seems to be nothing on worth watching. My cable company, Comcast, offers a basic service that consists of two dozen home shopping channels, one local channel that goes off the air at midnight and a scrolling directory channel to tell you what you’re missing if you weren’t so cheap and bought the premium service.

I’m also not certain why, after all these years of evidence to the contrary, TV execs still think no one is home watching the tube during the holidays. If anything, we watch MORE TV during that time either because there’s nothing else to do or we’re trying to ignore visiting relatives. So being a weird kind of guy from NJ my mind tends to wander while watching the news, and with nothing else on I wanted to see I simply imagined the fiscal cliff coverage was a reality show. It worked and it was great entertainment. 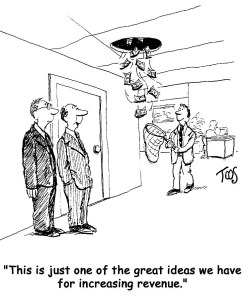 I tend to watch Fox News a lot because despite whatever the critics say they have Megyn Kelly as an anchor on their straight news programs. She is one of those wonderfully well-scrubbed, cheery, bright, intelligent, perky, beautiful girl-next-door types who could charm an audience just by reading names from a phone book.

She got stuck having to stand outside New Year’s Eve in Times Square to report the event, but apparently they kept making her give updates about the House vote on the fiscal cliff bill. Finally poor Megyn, looking half frozen and desperate to be home with her husband and kids, looked at the camera and said “okay, that’s enough politics, this is New Year’s!” She must have gotten some negatives from the director because then she looked sheepish and said, “sorry, they make me report that stuff.”

That’s when it all came together for me and it really seemed like the whole fiscal thing was one big TV drama. When even a leading news anchor gets fed up with the non-stop coverage you know the politicians have just gone too far. I don’t regard the DC crowd as one party or the other, I tend to think of them all as one big bunch of rogues. The only real difference between Republicans and Democrats is in how they separate you from your money.

The last thing to mention here is my total disgust at the way the President enjoyed such a lavish holiday while so many people could barely afford a holiday meal this year. The total tax tab for his trips to Hawaii is in the $7 million range and shows real arrogance and hypocrisy when he says everyone needs to sacrifice to make things better. Everyone but him apparently. We used to expect that kind of behavior from people known as “nouveau riche,” only at least they were using their own money and not someone else’s.

Enough complaining for one day. My New Year’s resolution is to at least try to stay positive and focus on good things. There is still far more good in the world than bad and we simply don’t hear enough about it. The media, myself included, tends to dwell on the negatives because it makes for more interesting reading, but we can too easily forget there are positives out there too. In the coming year I’ll try to mix it up more and balance it out. I’m sure there are plenty of you who will remind me I said that if I don’t do it, so please note I did say “try.” Hmm, now I’m sounding like a politician, drat.

With that, I’d like to wish everyone a very happy and prosperous New Year!