The backstory on today’s column is that the story I told was true. I had a horrible time with snakes the entire time I lived in Florida. The most prevalent snake I encountered was the black racer, which looks a lot like the highly poisonous cottonmouth. Meeting one of those things when leaving the house in the morning was, to say the least, daunting. 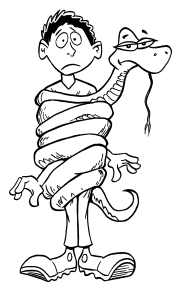 At least the snakes I had to deal with were indigenous to the area. The python is a good example of what happens when a species relocates from one area to another, in this case  mostly from carelessness and ignorance of people dumping pet snakes in the wild. Florida banned the import of pythons and several other snake varieties last year, but it was too little too late. The damage was done.

Pythons are not supposed to be that aggressive, but it seems they are learning new tricks in the everglades. The fact that they will take on an alligator, which is no mean feat, suggests they are getting bolder and bolder. Then again there is safety in numbers. 150,000 pythons? Yikes. That’s enough to make any gator look for a new home. Just for the record, I’ve seen gators in action and they are pretty fierce. That means the pythons must be just as fierce or even more so.

The main defense we have against huge snakes capable of swallowing a small-sized human is hunters with guns. My best to the 800 or so who have signed up to chase these snakes down, and a word of caution to Joe Biden and the anti-gun liberals not to go too far with their proposed ban on guns. It may sound stupid to say, but one day a hunter and his gun may be the only thing standing between you and getting eaten alive. The world is still full of dangerous things, including politicians.

Obviously I am not a fan of snakes. I know they have a place in the ecosystem, which is why I ultimately chose to get out of their neighborhood. The only place in the world that is completely snake-free is Ireland, and that is high on my list of places to move to if I keep encountering snakes, poisonous or not.

2 thoughts on “The Backstory: Florida’s war on pythons”