Lilith, first wife to Adam according to Judaic legend, was regarded pretty much as just a wretched, demonic character until the late 19th century. The artist Dante Gabriel Rossetti was one of the first to portray her as a beautiful woman in his painting, Lady Lilith, but he still speaks of her as a dangerous enchantress in a sonnet he wrote to accompany his artwork. On one hand he celebrates her physicality, but warns she is a “witch” capable of drawing men into her “bright web.” Rossetti’s poem was first published in 1868 and was later re-published as part of a collection, Sonnets for Pictures. 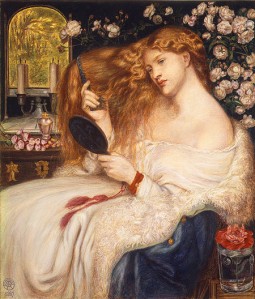 Of Adam’s first wife, Lilith, it is told
(The witch he loved before the gift of Eve,)
That, ere the snake’s, her sweet tongue could deceive,
And her enchanted hair was the first gold.
And still she sits, young while the earth is old,
And, subtly of herself contemplative,
Draws men to watch the bright web she can weave,
Till heart and body and life are in its hold.

The rose and poppy are her flower; for where
Is he not found, O Lilith, whom shed scent
And soft-shed kisses and soft sleep shall snare?
Lo! as that youth’s eyes burned at thine, so went
Thy spell through him, and left his straight neck bent
And round his heart one strangling golden hair.

Lilith’s progress from bad girl to good girl, or at least a less bad girl, continued nearly twenty years later when Robert Browning took up her cause in his poem Adam, Lilith and Eve. Browning added a new twist to the legend, focusing more on the emotional side of Lilith and suggesting she was friends with Eve and still in love with Adam. Eve becomes more the bad girl in this portrayal. About ten years after Browning’s work, artist John Collier painted what has become possibly the best-known image of Lilith as a beautiful creature with long auburn hair, and adorned only by a large snake. Despite the serpentine affiliation, Collier’s Lilith is voluptuous and bears no likeness to her reputed image as a screeching night demon that murders newborns and seduces men in their sleep.

One day, it thundered and lightened.
Two women, fairly frightened,
Sank to their knees, transformed, transfixed,
At the feet of the man who sat betwixt;
And “Mercy!” cried each–“if I tell the truth
Of a passage in my youth!”

Said This: “Do you mind the morning 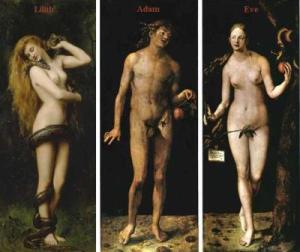 I met your love with scorning?
As the worst of the venom left my lips,
I thought, ‘If, despite this lie. he strips
The mask from my soul with a kiss–I crawl
His slave,–soul, body, and all!'”

Said That: “We stood to be married;
The priest, or some one, tarried;
‘If Paradise-door prove locked?’ smiled you.
I thought, as I nodded, smiling too,
‘Did one, that’s away, arrive–nor late
Nor soon should unlock Hell’s gate!'”

It ceased to lighten and thunder.
Up started both in wonder,
Looked round and saw that the sky was clear,
Then laughed “Confess you believed us, Dear!”
“I saw through the joke!” the man replied
They re-seated themselves beside.

The last poetic image of Lilith was by an aging graduate English student who became enamored with the original Hebrew legend and portrayed Lilith as a potentially dangerous yet sympathetic character. Despite her argument that her family tree is just as long as Adam’s, her demand for equality is dismissed and her spousal role relegated to the more submissive and not very bright Eve. Despite knowing what Lilith may be capable of, the author succumbs to her beauty and refuses to believe in, or simply doesn’t care about, her reputation. Perhaps Lilith’s real power derives more from the weakness of men than from wickedness?

Lilith, you naughty girl.
You’re up to your old tricks aren’t you?
You’ve been with those serpent things,
destroying men in a tangle of hair
with promises of touching a soft thigh.

I understand about Adam.
Were you surprised at what he did?
It was not fair to replace you with a rib.
As you pointed out, his family
tree was no longer than yours.

But the judge sided with him.
Did you expect that?
Two hims and the music was over,
then off you went to the dark sea
to deal with your demons.

Eve got the good publicity.
Isn’t that always how it is?
The subservient get,
the free spirits get put out.
At least you are free.

You got some satisfaction.
Eve wasn’t too bright was she?
That whole apple thing blew up,
proving Adam should have donated
brains instead of a rib.

I thought your defense was brilliant.
Who else would have dared to be so bold?
You argued that Adam, with his complaining,
be replaced instead of you.
But you were outnumbered, two to one.

Your legend continues to scare others.
You don’t really spawn with demons do you?
I don’t believe that one so beautiful
could steal my heart and cast me into hell.
Come closer so I can feel your soft hair.

It should be noted that this poem is what led to the book Stepping Out Of Time, which by amazing coincidence is available as a free e-book every Friday this month on Amazon. I know it was sneaky to put a plug in here, but I suspect Lilith would approve. Happy reading! 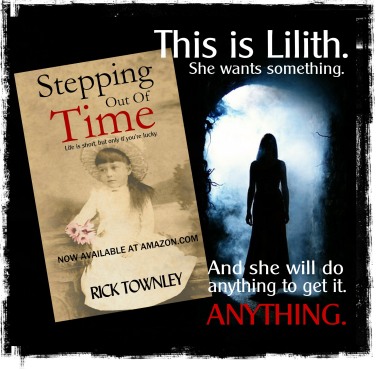 One thought on “Just A Good Girl With Bad Habits?”