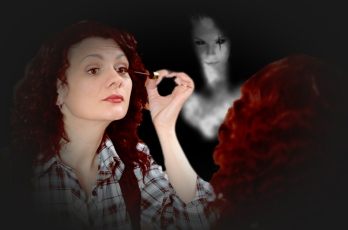 A week had passed and there was still no sign of Edward. Joanne refocused her thoughts on the mirror over her bathroom sink and plucked out another grey hair. At this rate, she thought, she could end up bald. Just then, a deep toned female voice came from somewhere behind her.

“Where is he?” demanded the detached voice.

She jumped and smeared eyeliner down her cheek making her look like Alice Cooper.

“Where is he?” the voice insisted, louder this time.

Jo couldn’t see anyone in the mirror behind her and let out a low shriek while spinning around to see who might be there out of sight. The voice spoke again, seemingly from nowhere and she shrieked even louder while looking side to side in panic. Then all of a sudden she saw a woman with thick auburn hair and a long black dress standing in the bathroom doorway. At that point, Jo lost it completely and slumped to the floor in a faint, her head barely missing the edge of the tub on the way down.

The woman walked to the sink and stood over Jo’s unconscious figure, looked down and shook her head in disgust. “Pathetic,” she said. She picked up the hair brush from the counter and felt the bristles, then ran it through her soft, smooth mane. There was still no image in the mirror.

Excerpt from Stepping Out of Time, available in print and for Kindle on Amazon.com